Getting to know the Caribbean’s most geographically diverse country

Dominican Republic is a country located on the island of Hispaniola in the Greater Antilles archipelago of the Caribbean region. It occupies the eastern five-eighths of the island, which it shares with the nation of Haiti. The Dominican Republic is the second-largest Caribbean nation by area (after Cuba) at 48,671 square kilometers (18,792 sq mi), and third by population with approximately 10,299,000 people (July 2018 est.), of whom approximately three million live in the metropolitan area of Santo Domingo, the capital city.

Although it is a Spanish-speaking country,  it is no secret that the DR is a very inclusive country. Thanks to globalization, tourism and other factors, English has become the second most spoken language in the country. Much so, that the government declared that English and French are mandatory foreign languages that must be taught in both private and public schools.

The Dominican Republic has the ninth-largest economy in Latin America and is the largest and fastest growing economy in the Caribbean and Central American region. The recent growth has been driven by construction, manufacturing, mining, and specially tourism.

It is the most visited destination in the Caribbean, which makes tourism one of  the fueling factors in the Dominican Republic’s economic growth. The year-round golf courses are major attractions. As a geographically diverse nation, the Dominican Republic is home to both the Caribbean’s tallest mountain peak, Pico Duarte, and the Caribbean’s largest lake and point of lowest elevation (bellow sea level), Lake Enriquillo. It has the “prettiest beach of the whole Caribbean” named Bahia de las Aguilas.

The country is also the site of the first cathedral, castle, monastery, and fortress built in the Americas, located in Santo Domingo’s Colonial Zone, a World Heritage Site.

Ecotourism has also been a topic increasingly important in this nation, with towns like Jarabacoa and neighboring Constanza, and locations like the Pico Duarte, Bahia de las Aguilas, and others becoming more significant in efforts to increase direct benefits from tourism.

The island has an average temperature of 26 to 30 °C all year round and great climatic and biological diversity. Great for enjoying the beach any time of the year.

Music and sport are of great importance in the Dominican culture, with Merengue  as the national dance and music, followed by Bachata and Salsa.

Merengue festivals are held in cities in the Dominican Republic like Santo Domingo and Puerto Plata every year. Danced in pairs, flirtatious gestures are used as participants move in circles to the rhythm of music played on instruments such as the accordion, drum and saxophone. It is a dance that is usually introduced to learners at an early age. Knowledge and skills on the practice are transmitted through observation, participation and imitation. The merengue attracts people of different social classes, which helps to promote respect and coexistence among individuals, groups and communities.

There are three main types of merengue are played in the Dominican Republic today. Perico ripiao which is usually called merengue tipico (classic) is the oldest style commonly played and when translated in English the name “perico ripiao” means “ripped parrot” which suggests controversy but is said to be the name of a brothel where the music was originally played. The other 2 types are Merengue de Orquesta and Merengue de Guitarra.

Fun Fact: Dominican Republic has won a Guinness World Record for the largest number of partners dancing merengue. It took place in Santo Domingo on Sunday November 03, 2019. According to Guinness, more than 420 partners danced for over five minutes to break the record previously held by Russia.

Bachata was influenced by the Cuban bolero, but originated in the DR and is unique to this country. It was looked down on by the upper class for a long time, considered the music of bars and brothels, with lyrics about romance, sex, and poverty. Plenty of double entendre (doble sentido) and sexual connotations are hallmarks of bachata, which took shape in the 1980s, and for this reason is culturally entrenched. It’s the music of love and heartbreak.

Instruments used in bachata, a three-step dance with a fourth tap step, are numerous: guitars (lead, electric bass, rhythm), bongos or drums, and the güira.

Artists credited for taking bachata to the international stage are Juan Luis Guerra, with his album Bachata Rosa, and more recently, Romeo is blazing his way through the charts.

Baseball is by far the most popular sport in the Dominican Republic. The country has a baseball league of six teams. Its season usually begins in October and ends in January. After the United States, the Dominican Republic has the second highest number of Major League Baseball (MLB) players.

Basketball also enjoys a relatively high level of popularity. Tito Horford, his son Al, Felipe Lopez, and Francisco Garcia are among the Dominican-born players currently or formerly in the National Basketball Association (NBA).

In boxing, the country has produced scores of world-class fighters and several world champions, such as Carlos Cruz, his brother Leo, Juan Guzman, and Joan Guzman. B

Amongst women athletes, it is also important to mention, the Dominican Republic women’s national volleyball team are knows as “Queens of the Caribbean” because of their continuous wins across the world, winning championships after championships.

Cabarete, located in the north coast is known as the Wind Surf capital of the World. The relatively flat water in the bay combined with fairly constant trade winds and thermals make Cabarete an ideal spot for the sport. It is regularly home to international competitions such as  the infamous Master of the Ocean. 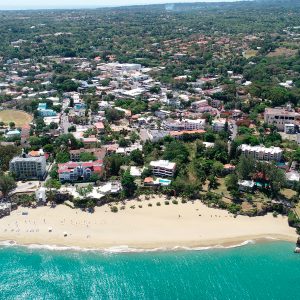 North Beach Management SRL (NBM) is a Real Estate and Property Management company located in the North Coast of the Dominican Republic.